A Little About Hairdressing

First of all, I like how certain books have the funniest chapter titles. Of course, recently, I was a bit astonished upon coming onto the next chaper and seeing a Russian vulgar curse word. A single word, the title of the chapter. I guess if you don't know Russian you wouldn't think much of it or you would be curious enough to google it. Anyway, the book was pretty cool nevertheless. Books are like that.
***
Upon starting the blog a while back, I was researching about it, and one of the meanings included the blogger to be self-absorbed. It makes sense in a way. Writing, posting, linking, etc...now who cares, right? So it means I'm self-absorbed. I am also in the 'beauty business' and stand in front of a mirror all day long. That would make me vain and conceited as well. Wow. What a combination.
***
Each heart know its own bitterness, and no one else can share its joy.
Proverbs 14:10
Nothing facinates me more than human beings. And what better way to learn about them, than hands on, one on one, for about an hour or more with each. I might see a client one time and never again, or month after month, year after year, but in each time someone sits in my chair there is something to take out of it! From the moment I greet them with a smile and a handshake. As much as I like the artistic, creative side of it, I believe I get caught up in the relational part of it way more. But to have both is just grand. Be in an awesome setting, work with people of that same interest, dress in attire of own choosing, listen to music all day long...and have conversations, meaningful or not at all, all day long. With people from all spectrums of this city; from the five year old, to the 70+. Male and female. Whatever orientation, whatever culture. Students, McDonald workers (used to be one) professors, physicians, you name it...And having to listen. That means I can't tell you right or wrong, my personal opinion, my views, or "oh my i so don't agree!" It all falls back to the fact that my client is a paying client who's in my chair for a service. (Don't forget that, I tell myself.) It's like a window into these peoples lives, the whys whats wheres of their life...Hearing the happy and the sad. The open or the closed in (sometimes I have no clue what to say.) Or the ones that want to just relax and close their eyes...and I absorb it. To hear, I trust you (with my sharp shears near your eyes or your ears- ah, scary!)...or That's exactly what I wanted! To be able to see what they're envisioning...Sometimes quite a challenge, sometimes just a breeze. I enjoy it all! Of course, on those days I feel a failure, is when my life is affecting my work. Or when I'd rather cut or color and not say a word. Then, in my opinion I am not following my own personal job description. Who likes it when the listener goes, 'aha, yeah, aha'? Even a fool knows when he's not being listened to. Or I'm behind and have to rush. Who likes to be rushed on? Would you rush through in open heart surgery? Or when I cut someones bangs too short...Believe me, it can't be too perfect all the time. Wink wink...Someone might have talked me up and I was nothing you expected. I fail, I make mistakes, and not everyone will like me or what I do. It's one of those businesses where, yes, you could be coming because you like your hairdresser, or you like what the hairdresser does. I always think, I hope your not coming out of obligation for goodness sakes. It won't hurt my feelings.
Maybe you have something that you are so excited about, that you love doing, that keeps you refreshed and challenged and eager. Something you know you were made to do. Mine is my job. Simple.
You hear the word hairdresser and you have that stereotype jump out in your head. Oh, she's a hairdresser. Ok.
Well, I chose to be one. And for anyone who chooses to use my 'profession' as a form of degredation will not succeed. I might not have a fancy title, or make a lot of money today, but for a single girl, loving the job is worthwhile. Anyway, most people need some sort of hairdresser, right?

"Indulge in the best form of therapy: a haircut...they are psychotherapists."
-Amanda Harlech
So, I won't pretend to be something I'm not. I am just a hairdresser. But. I did like that phrase when I read it in a magazine I was browsing through at Aunties, back in November of 2009, and typed it into my notes on my cell. And I have to say, I do agree. Cutting my hair in February was the best thing I did for my self. It's a dream haircut but the timing had to be right, and it would have to be where I wouldn't miss my long hair and regret chopping it off. Otherwise the joy of having short hair would be lost. Alongside that, having done such a drastic cut, it is totally such a great distraction. And yes, some would say, oh my she's gone mad, poor girl, etc...must be because of a breakup...Well, it's undeniably true that the timing was exactly so. After a breakup. That's all. I've noticed when clients mention drastic change, it has to do with something big. A male client who's worn his beard and mustache for years, asked me my opinion about shaving it off all of a sudden. I of course, usually try to find out what made them decide to do such or such. The next time I saw him, it pained my heart to hear him say in our conversaton that he thinks he was depressed lately and if he talks about it, he will cry. I froze in my mind, my hands still doing the motions, but my mind scrambling for the right words. Not the first time things like that played out. It's interesting. 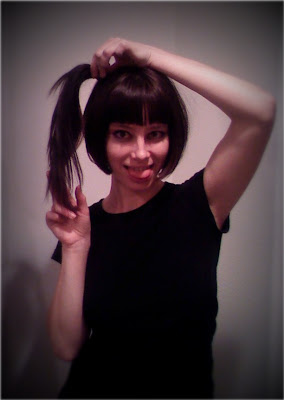 I love change. Three snips and you look different. Bangs? For sure! Blonde to Black in one day? Awesome! Having cut my hair was a precursor for some of my own clients to ease into change of their own. That was pretty cool to experience. As soon as I see an inclination of some sort, that they want to but are afraid, we do it gradually and in steps...for some it's been three years, but they now tell me, 'oh i don't care where you part it, do what you like.' Coming from someone who is older and very set in her ways. A lady that if she didn't see me cut into her bangs, I have to 'do it over' so that she sees it and has peace of mind. I never would have been able to do anything different when I first started cutting her hair, at the beginning. Now that's cool.

Lately though, my job has been emotional touching...Sometimes I get a chill up my spine, the hair on my hands stand straight up, and I get goosebumps!
When people ask questions that you can't answer light heartedly, when they tell you things you wonder if you should know, and when people's live show that my life is just a breeze so far, it makes me think...
"I've been thinking about this alot, what really happens when you die?"
"It just seems like life is so unfair. The good ones die, and the cruel live on. Why?"
My mind stops, my hands keep moving...
When clients talk of loss, of hardships, when they cry...I just want to do something, help. I guess I do in a way. They can tell me anything they want or nothing at all. I'm there to listen with no obligation of any sort. You don't have to see me again in a lifetime. Well, Spokane's not that big...
And I have to say, the best day recently was, to see a client that I wrote a message to, return after a whole year. Surgery, intense treatments, short tiny hair, but back on her bike and alive!
She touched my heart like many times my clients do...Last year she had told me out of the blue, "I quit my job." Just like that. Later she returned, we chopped her hair and she's been gone for a year. So this month, in asking about the outcome of the job thing, she said, "It's interesting that you ask." She had quit her job so that not a single person would know she got diagnosed with cancer. Back then, I had no idea...Yet she came and told me. A stranger. Her hairdresser.
***
The other day, a client who sat in the chair next to me had a very long appointment. In that time I had three clients. I don't know if she thought this, but she could have described me as bipolar. But hey, I have to do whatever it is to please my client...so I change personalities. It's not because I actually change. It's more of 'speaking their language'. It's fun!!

In the end, weather I have to entertain, or be serious my job really is making sure to get that hair in it's best lookin' form.
***
By the way, did I say, a little about Hairdressing?