What a perfect little day!
As I'm sitting here in my favorite outfit ever- thermal print top and sweats, with sheepskin slippers- and  think over today...
Perfect timing for white, fluffy snowflakes. On Christmas eve! Steamed milk over mini marshmallows and crushed peppermint candy canes, with coffee.
A stop for a peppermint steamer with a friend.
A great Christmas eve service. 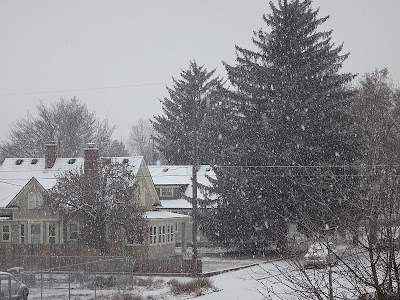 ~You'd think the streets are just fine. But I hit a bump and my car was thrown into oncoming traffic, coming down the hill. Right as soon as a car had passed! And then as soon as I made it back into my lane, the next car was already coming head on. So I made it in just in time...Can be scary in the dark on icy roads!~
And a game of monopoly...
I haven't played monopoly in a very long time. My opponent was very competitive, as she stated.
I had hotels....and eventually, after two hours,  I won.

And then, there's all that's unsaid...
*
I wish to say Merry Christmas to ones I won't see face to face. Won't personally greet.
So, once again, Merry Christmas!!
- a little window into the soul at 11:07 PM