“A mother’s arms are made of tenderness and children sleep soundly in them.” – Victor Hugo

A few thoughts in condensed form;)

As I cradle my baby.
I remember the post Peter made with the said quote. We used to watch the show Criminal Minds and they'd always have a cool quote before and after an episode. That is where he heard it.
For some reason, it makes me think how often people do things out of obligation or routine. You can rock a baby to sleep because you have to. Or, you can rock a baby to sleep because you love her. With tenderness and affection.  She's precious to you and you want her to get the rest she needs to grow and develop.
You can stay in a marriage because "you have to". Or because you choose to love with a Christ like love, stay committed and devoted, seeking to work at anything that comes your way.
You can go to work out of pure necessity or you can find joy in the God given job and enjoy what you do.
We like to complain. (I do too.) But if what we complain about so much in our life was taken away, we would complain even more!
I'd rather be grateful, thankful, appreciative, and happy about whatever it is in my life, than lose it and then be devastated.
I'd rather do what I do out of love than pure obligation. (Even though, obligation still plays a huge role.) it's the motive and the approach that make all the difference.
//
Little boy comes over today...
Nothing like a child to show you how dirty your house is. What seems to be decent and looks good from afar and in general is quite not the same when stooped down low and seen from 'up close and personal'. Like a baby on the floor that picks up every piece of lint, hair, crumb and all, it's good to get down low, close and re-examine. Not so clean as it once appeared. And so it is with people. We look at "their" life, from afar, through a projected imagery they have displayed with chosen words or photographs and decide, 'but their life is so...but they are...' "I like him." "I like her."
But no. Get close. Re-evaluate. Analyze and be real. Too many times that big smile on a photograph is just a mask for the reality of pain. (Do not take this the wrong way-I am not talking about myself!)
Too many times, if you would get closer and find out what it looks like up close, you'd change your mind.
Don't like, for mere appearances. Don't desire based on "the sound, the looks of it, him, her," "That's suitable for me." "If only I could be, have, do..."
Basically don't believe in the lies and illusions, pretenses of what is presented from a distance. Know what's real, truth. Find out and see it as it is. There's more happiness in that.
- a little window into the soul at 12:24 PM 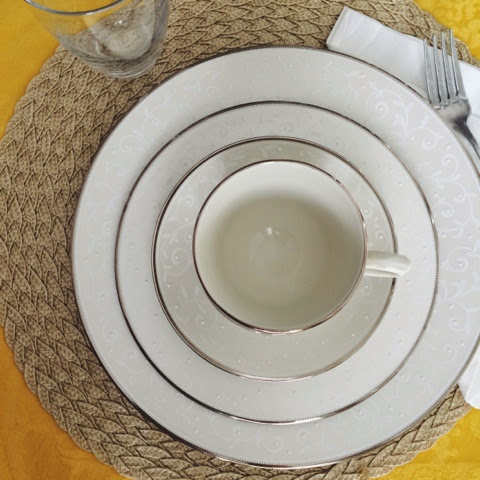 As far as I got with my china collection when I was single and thought it would be a good idea, because you know, I liked fine china...If I could, I would dress up the table real fancy always, but there's more important things in life;) Peter's sister and her husband moved back and we had them over for dinner... 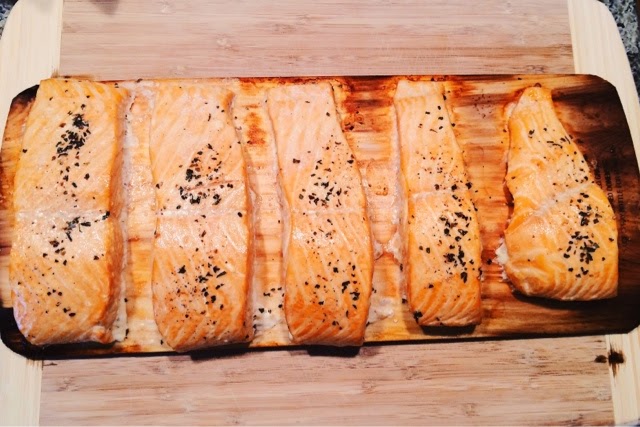 And Peter tried out grilling on cedar planks. I really like how the salmon tasted! 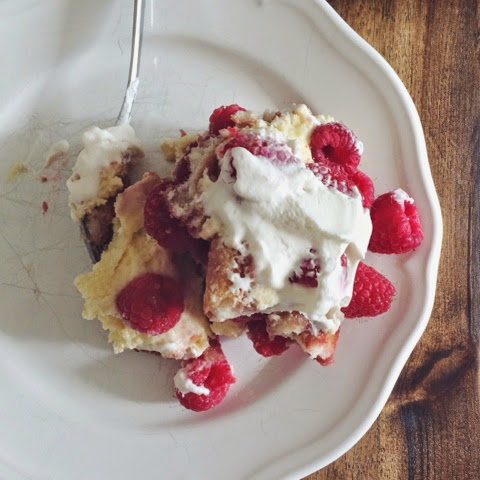 My first attempt at a trifle with home cooked custard and cream... 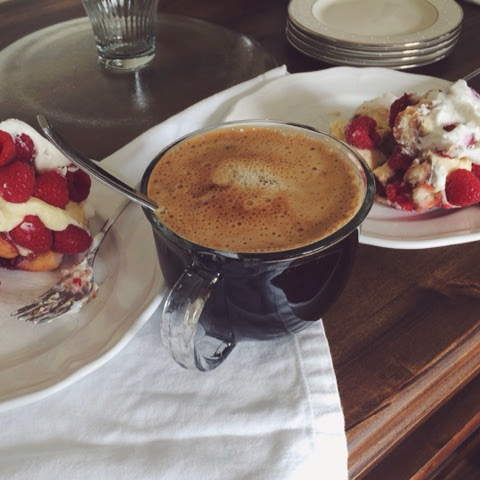 So the morning after is always cake with coffee. Except this is fake coffee:( 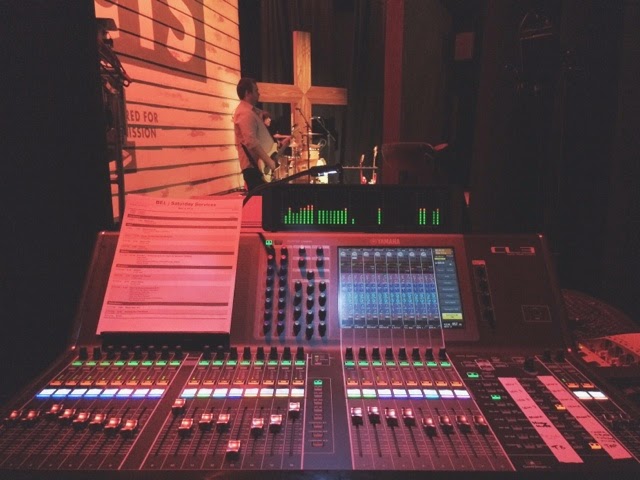 Peter sends me photos while behind the stage. Serving at church at the sound board... 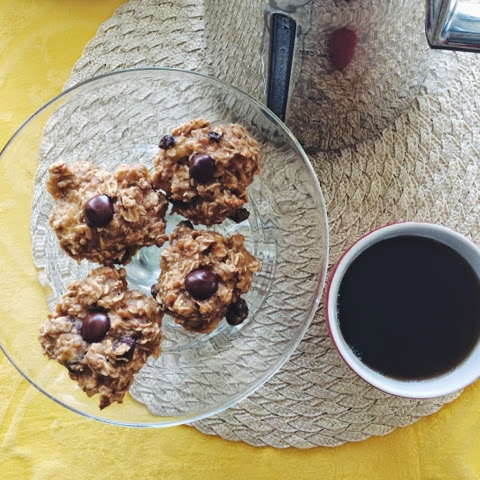 In an attempt to have dessert I will make anything...crackers with peanutbutter, bread with butter and jam or honey. You know, anything to have with tea...so this is perfect because it's sweet enough like a dessert but has no butter, no flour, no eggs. Pretty much a healthy version and a great substitute for all that creamy rich stuff I eat too much of... 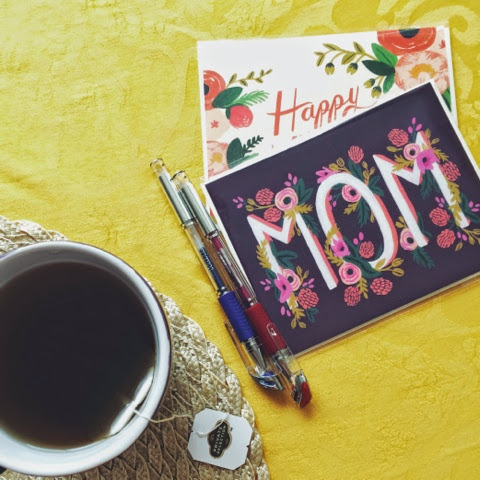 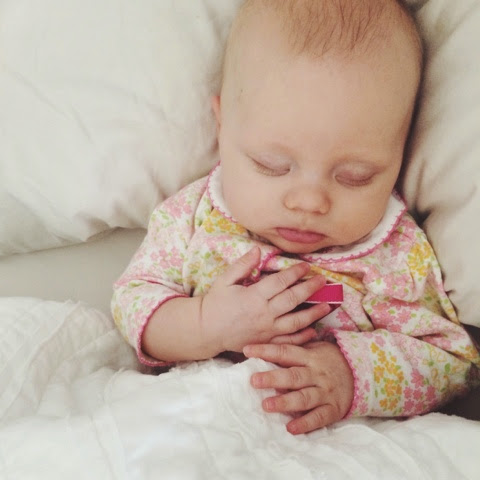 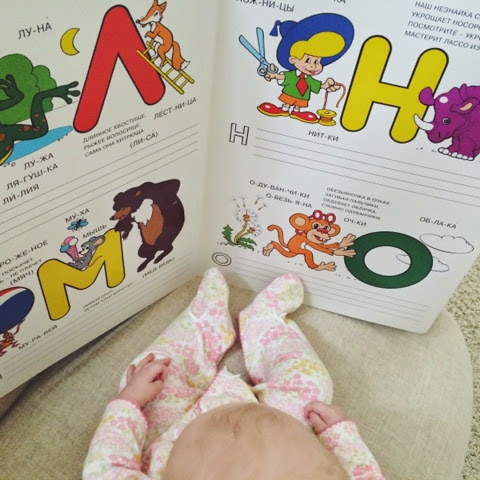 I don't know if it's me who's learning or Jemma... Big Russian азбука, or alphabet book! I think I learned a few new words...for those that think three months is too young, I would disagree because Jemma loves books already! And we've been reading to her, her entire life;) hehe 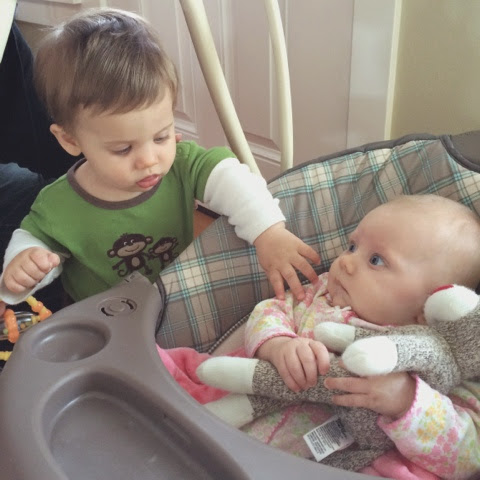 This boy came over for a little haircut. Jemma looks like she's holding her monkey for dear life, but really didn't even get a chance as it slipped out of her hands... 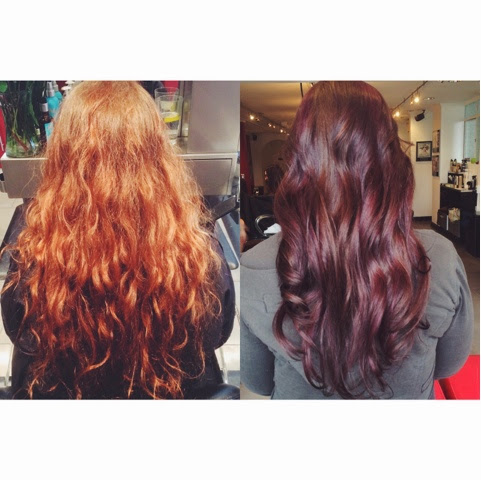 I'll be working every other Saturday while Peter spends some time with Jemma. This was from my first day back at work! I was pretty excited. 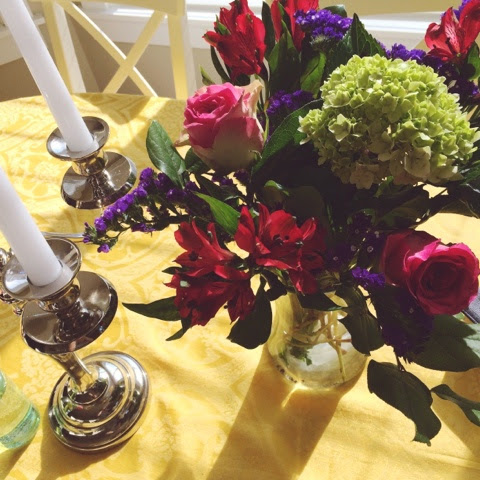 My Mother's Day /welcome back flowers from my kind boss. 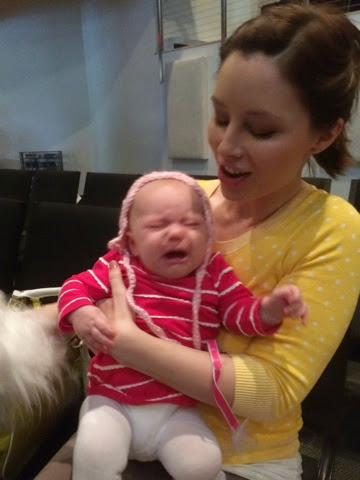 Mother's Day service. Jemma was a bit cranky before church until it started. As you can see... 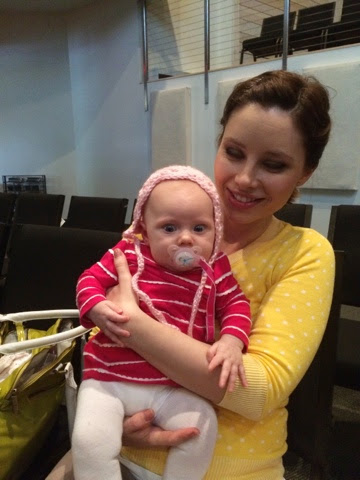 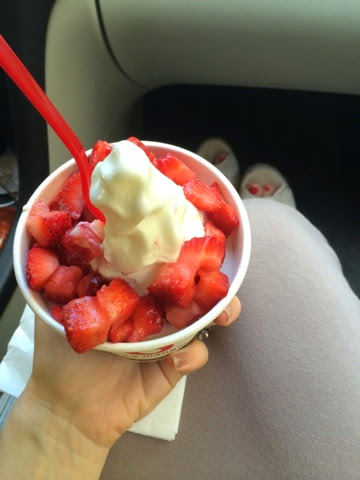 Peter always comes back with something! Refreshing goodness while driving into Seattle to spend Mother's Day with his side of the family at his sister's place... 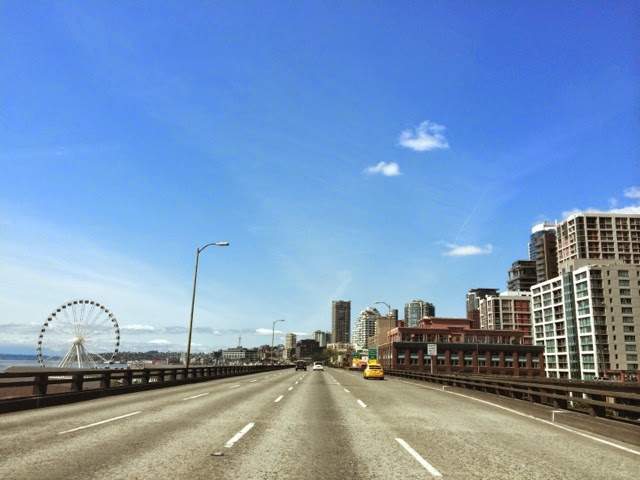 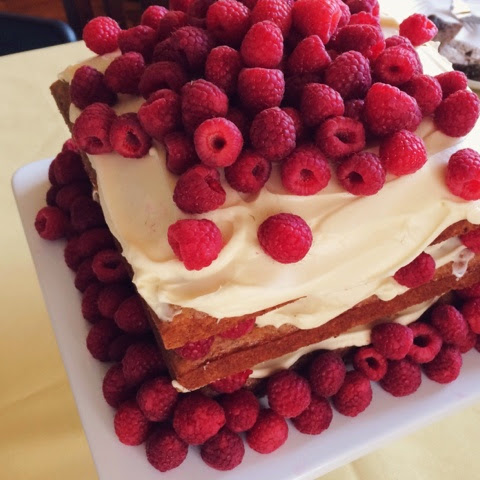 The girls baked a cake! 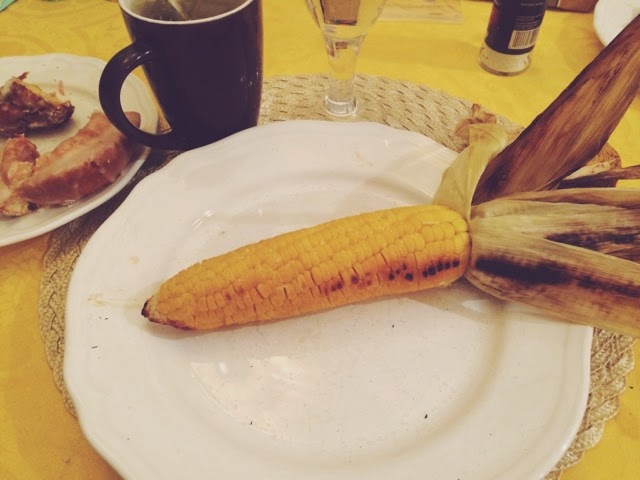 And my favorite grilled just for me by my favorite.
Baked potato and corn! You can see leftover donuts from the morning;) 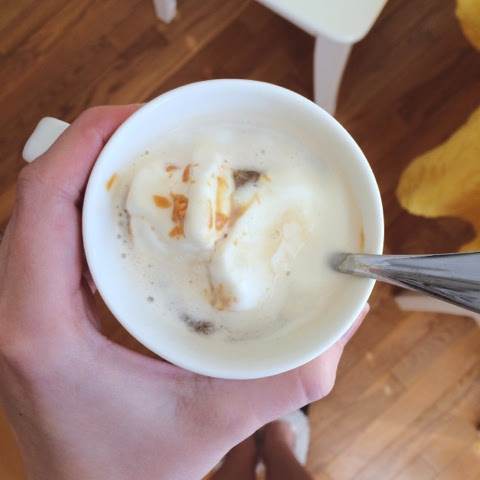 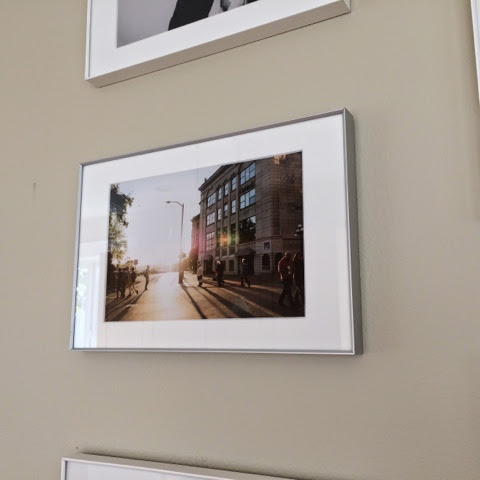 I really enjoy seeing Peter's photography on our wall! 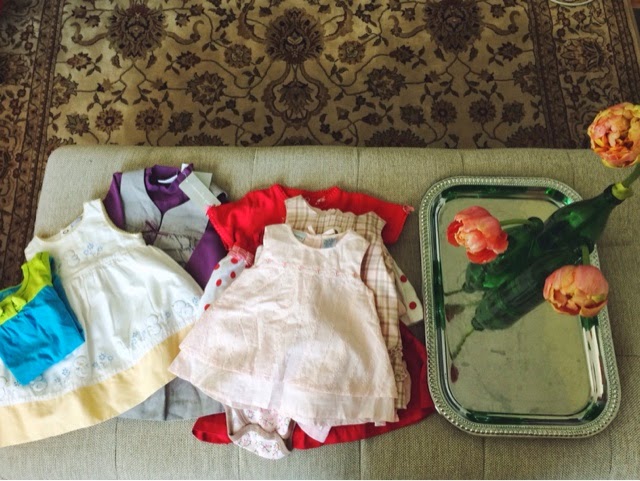 My mom finds things at thrift stores and sends us packages...clothes for Jemma.
That's something I'm looking forward to this summer. Getting out to some garage sales and rummaging through some Seattle thrift stores...
Anyway. I really am behind. Obviously. Mother's Day was over a month ago. Whoops.
- a little window into the soul at 8:57 PM 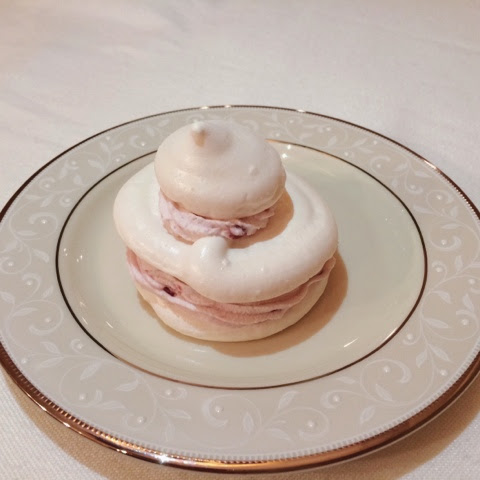 I had been looking at this recipe for so long, waiting when I could finally have the moment to make it. It was 'almost' perfect. We tried it Saturday night before Easter. I like it because it's easy to make but looks 'fancy'. And can be assembled before serving. I told my husband this week, that I will have to fail a lot in order for me to be able to make things instead of buying them! So here's to many attempts! 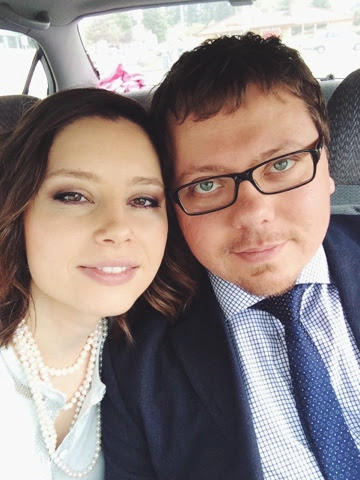 Easter Sunday was lovely. We went to church, then lunch at Peter's parents. 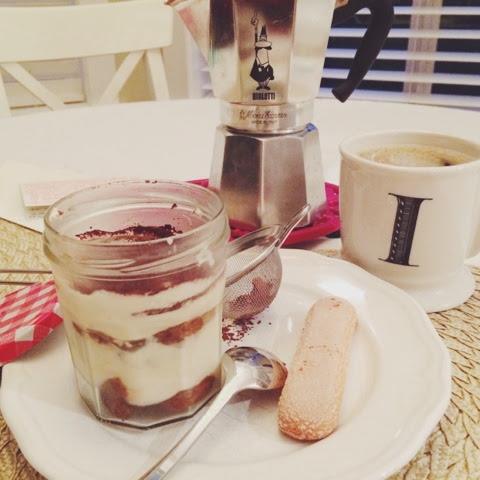 I totally enjoyed making these single serve Tiramisu! I save the Bonne Maman preserve jars, and they were perfect for something like this! Even easy to take to work the next day! I'll be making Tiramisu in the next few weeks but in a cake form!
Each time I research what I'll be making, and then as I make it, I learn so much! Sometimes it's ok to mix and match recipes, adjust to your own liking, substitute etc, and sometimes, especially for certain things, it's best to follow the method. 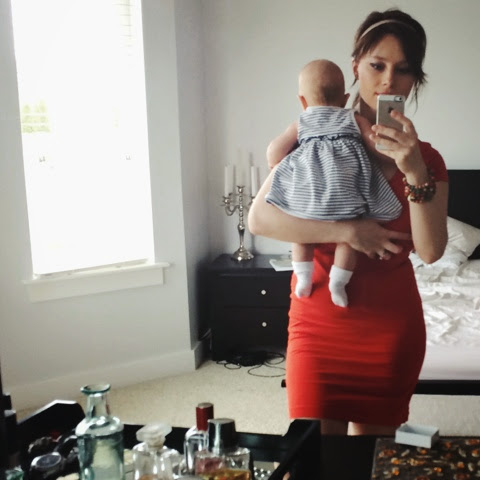 Jemma had turned three months, so of course, I took a bunch of photos! She plays along to mommy's crazy ideas pretty well. I enjoy her smiles and baby talk so much -it's precious! And then, peter gets texts full of my explaining 'what Jemma did' and photos throughout the day . 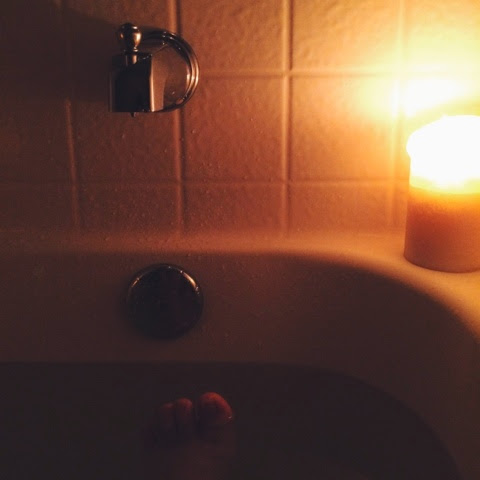 My sweetheart took over for the night, this past Friday night, while I had an evening to rest and relax. It was like a little bit of a spa night for me, in my own home. It felt so good to relax and take my time, knowing he had her and would put her to sleep...these kind of moments are needed for any mother -to recharge, to relax, in order to have energy and stamina to keep going. I'm thankful that my husband does that for me and understands the need!

I told him this past week how I appreciate the fact that he doesn't complain how much of my hair is everywhere! Nightmare, but to all who have had a baby -that's what happens. Being a hairdresser, I'm used to hearing about it, and working with hair, it doesn't bother me. Yet with my own post baby hair loss, I still don't like it at all! He said, "it's not your fault." Anyway, good thing I have a head of furr for hair! And the fact that I haven't texturized or thinned it is probably a good thing too! 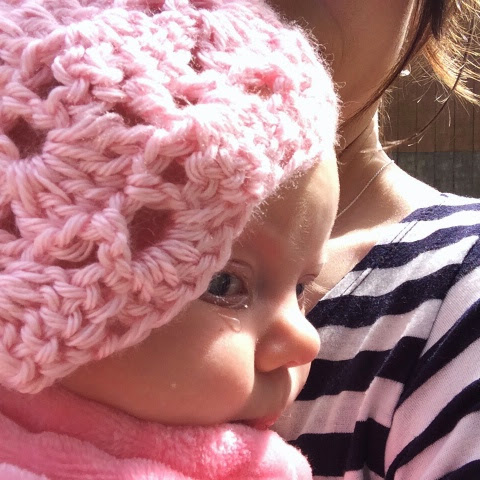 We attempted to go to a baby shower this Saturday. I had noticed that Jemma got overwhelmed with something new to her when I stepped into world market just recently. So I wasn't surprised that after stepping into the house where the baby shower was, with one look and she started bawling. We tried three times, and after that, went back home. And that was our outing for that day.  She knows her house and her room so well, and apparently, it was all too much at once... 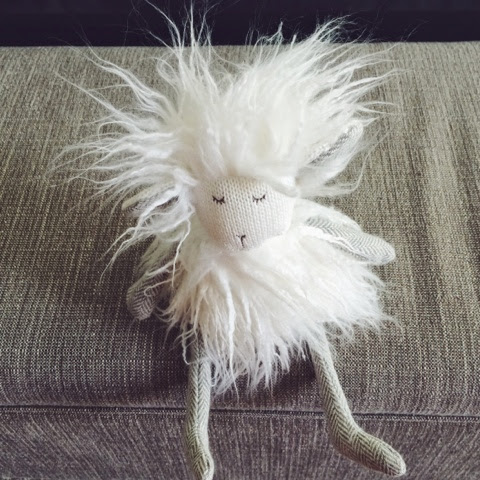 This little eccentric lamb is a new little project on Instagram. I grew up mostly without any extended family here in the states. It was about ten years after we moved to America that anyone else had come. So we grew up with just us siblings. Of course there were quite a few of us. Seven kids can't be that lonesome.
But anyway, my sister and two sister in laws all have kids who are cousins and at this time, we all live in different cities. So to unite and bring together, we have an Instagram account to share together, our little one's lives. 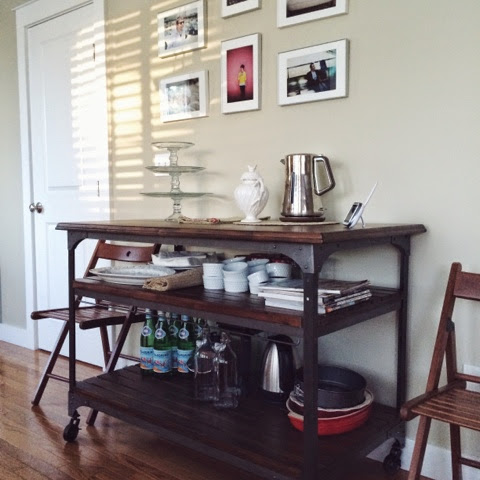 This kitchen cart is now a new addition to our eclectic home. A new baby/early Mother's Day present! Thanks to my douceur! (Honestly, I'm not sure I can even use that word in the sentence that way! It means sweetness.) Serving/storage/workspace.

I was singing a part from Fiddler on the Roof, "if I were a rich man, ladidadidadida..." And Peter said, "you'd have World Market in your home." I'm not sure now, he could have said, "you'd live in World Market." Anyway, something along those lines! He went to get me some ladyfingers, because guess what? I'm making a few things which call for those in the recipes! And the cashier asked, "May I ask what you are doing with those ladyfingers?" I guess you'd want to know too, if a guy goes to the store and buys just three packages of only ladyfingers! He's a sweetheart. Supporting my desires, buying cartons of eggs from Costco and packages of ladyfingers! 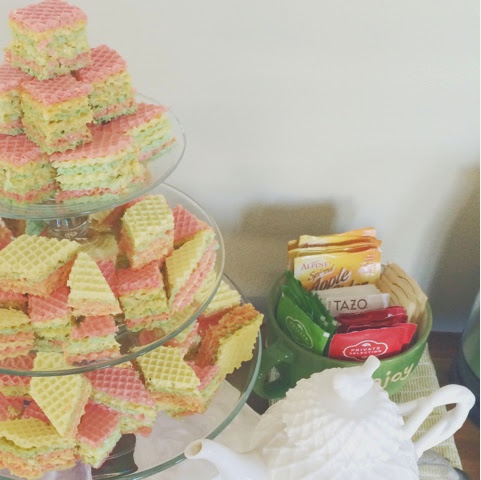 This Tuesday night we hosted our community group cuisine around the world dinner. Being Russian, we made Russian food. Choices of borsh, pelmeni, shuba, kompot, and these waffle cakes as well as salads, kvas, and other food that people also brought.

And today, it's already the first of May! And what a hot, hot day! I stepped out for just a few minutes with Jemma at 10 am and already felt scorched. As much as many are rejoicing for the sunshine and heat, I was thinking of the hours when I'm going to be putting Jemma to sleep and how hot it gets at that hour when I'm holding her and were both hot and being swaddled gets her even more hot, but she still wakes herself up with her little hands...you get the picture. So I'm keeping all windows and blinds shut to keep as much of the heat out as I can!

Tonight. I am making a raspberry trifle (with ladyfingers) for tomorrow's evening dinner. I'm excited. I've never made one before, just like everything else I want to make...I don't have a fancy trifle bowl, but one of the girls at a New Years party had said that Peter's cake stand top can be flipped and the stand turns into a bowl, which looks pretty much like a trifle bowl, so that will work!